Drug trafficking continues to be one of the most highly lucrative businesses for organised crime and has become the main challenge in regions in the grip of violent drug cartels.Although Latin America and the Caribbean are home to a mere 9% of the world’s population, this is where 34% of all violent deaths occur, a statistic that is directly related to drug trafficking in the region.

In the last decade, some Latin American countries have also become areas where drugs are used, while others are now transit points for illegal goods.

In light of the situation, the EL PAcCTO Support to AMERIPOL project, financed by the European Union and in whose management the FIIAPP (one of the two coordinating entities of EL PAcCTO together with Expertise France) is a participant, has held a series of video conferences channelled through the Executive Secretariat and AMERIPOL to disseminate and promote good practices and lessons learned in different parts of the European Union and the Latin America. The initiative was an opportunity for police forces and Latin American and European bodies to share good policing practices for investigating crimes related to drug trafficking.

These video conferences are an excellent opportunity for regional European and Latin American organisations to share their experiences.

The ninth conference addressed the problem of drug trafficking. Marcos Alvar, head of the Support to AMERIPOL project, remarked on the importance that Europol attaches to AMERIPOL as a counterpart in the Latin American region: “We must consider the importance of the latest advances in cybercrime, illegal migration and human trafficking, the progress made with the police information exchange system and also data protection regulations.” 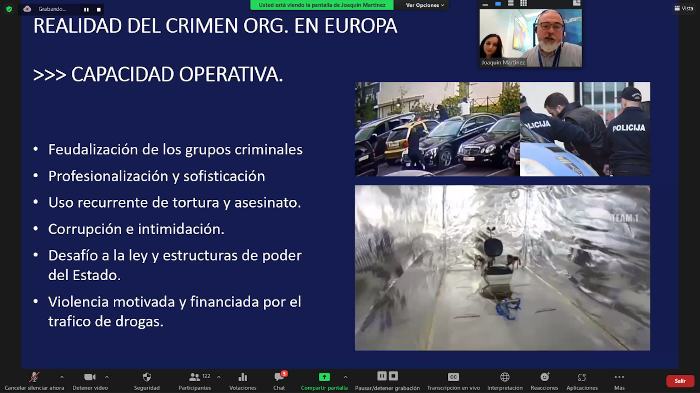 Milton Fornazari, delegate of the executive secretary of AMERIPOL, talked of the need to work together to combat drug trafficking: “Only through intelligence work and joint investigations can these crimes be tackled effectively.”

These exchanges are an occasion for analysing strategies to combat crimes associated with drug trafficking such as money laundering, human trafficking, sexual exploitation, document forgery and trafficking in arms and other illegal products.