A delegation from EL PAcCTO was in Ecuador from 31 May to 4 June to attend working meetings with some of the nation’s most senior authorities. Together with the Delegation of the European Union in Ecuador, the main objective was to present the programme to the new authorities and establish new targets for the coming months.

EU ambassador to Ecuador Charles-Michel Geurts led some of the meetings with the co-director of EL PAcCTO, Juan Gama, and the deputy coordinator of the Prison Systems component, Paloma Casado-Torres.

The meetings were held at the State Prosecutor’s Office, the National Police of Ecuador, the Ministry of Foreign Affairs and Human Mobility, the Unit of Financial and Economic Analysis, the Council of the Judiciary, the National Court of Justice, the National Service for Comprehensive Attention to Adults Deprived of Liberty and Adolescent Offenders and the Ministry of Government. Also with the embassies of several Member States: Germany, Belgium, Spain, France and Hungary.

All the institutions welcomed and showed their commitment to the European Union and to the EL PAcCTO strategy. The ultimate aim is to create a climate of cooperation, an institutional alliance that brings the two regions closer together and strengthens the fight against regional and international crime.

One example of this is the Specialised Multidisciplinary Team against money laundering supported by EL PAcCTO that has already started work in Ecuador. The institutions involved in the SMT (UAFE, State Prosecutor’s Office, National Police and Ministry of Government) marked the visit by the programme’s members by holding their first meeting at the headquarters of the Financial and Economic Analysis Unit, which was attended by its CEO, Leopoldo Quirós. Quirós highlighted the importance of the European Union in fighting crimes such as money laundering “with permanent training vital for Ecuador and the region as part of an overall strategy. This technical assistance shows how institutions that work against corruption, money laundering and other crimes can coordinate with each other”. The co-director of EL PAcCTO, Juan Gama, underlined that “the UAFE has been enthusiastic about creating the team from the outset, not to mention the strong commitment of the other institutions like the State Prosecutor’s Office, the National Police and the Ministry of government. The ultimate goal is to have specific investigations, fight organised criminal groups, make arrests and recover property”.

International cooperation and specific work to address issues significant to Ecuador: the comprehensive approach to organised crime in the prison system

The highest representatives of Ecuador’s institutions showed their commitment to some of EL PAcCTO’s most strategic activities, such as the high-level meetings between justice institutions in Latin America and the European Union (the next one will be held from 28 June to 30 in Lisbon), the creation of the Latin America Internal Security Committee (CLASI) and the development of the Instrument for Threat Assessment in Latin America (IDEAL).

Ecuador also supports work in other priority areas for the country such as cybercrime, money laundering, environmental or sexual abuse of minors on the internet.

On the international cooperation side, maximum support from all institutions to strengthen relations with Eurojust as well as the implementation of the Coopera-Jus tool in the country launched by EL PAcCTO to facilitate cooperation in judicial matters.

Ecuador is strongly committed to fighting infiltration of organised crime in prisons. As a result of this interest, EL PAcCTO and the Ecuadorian institutions will design a comprehensive prison coordination system. In turn, the programme will prepare new activities with the National Service for Comprehensive Attention to Adults Deprived of Liberty and Adolescent Offenders to strengthen this new structure. 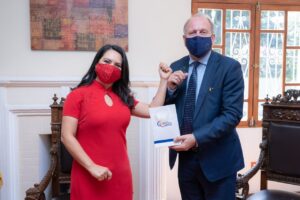